Steel’s use as a construction material roughly follows the same timeline as steel innovation in general – especially as railroads became a popular mode of transport. In the 1800s, there were three forms of “ferrous metals” in use: wrought iron, cast iron, and steel. Wrought iron was very familiar to blacksmiths who had been working with the material for years. While we now think of it as mostly decorative, in the Victorian era, it was also commonly used as a building material. Cast iron, strong but brittle, was more widely used for cooking and farming but was not very appropriate for building. Steel was expensive to produce and was used for higher-end items like watches, swords, and scythes. 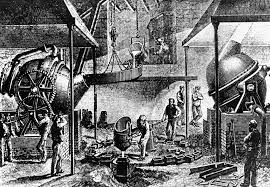 In 1855, the Bessemer Method, created by Sir Henry Bessemer in England, made the production of steel more efficient. It allowed for the creation of steel with good tensile strength, however, wrought iron continued to be the more prevalent choice for iron-based building of the period. By 1879, inventor Sidney Thomas mastered a method to remove phosphorus from steel – increasing its quality and its possibilities. His “Basic Process” meant that steel could finally be produced more cheaply, so it’s production rapidly grew. His method became popular in Europe and, by the 1880s, steel quality became more consistent.

In the United States, the Great Chicago Fire of 1871 destroyed thousands of timber buildings. After the fire, Chicago responded by creating stricter building regulations by requiring non-combustible construction materials including brick, stone, marble, and limestone. Other building solutions were cast iron and wrought iron paired with brickwork, but as the city grew, Chicago needed to look to steel construction to go skyward.

Steel is the world’s most trusted material, so it’s no wonder so many buildings and infrastructure are built with it. That’s right: the majority of steel goes into the construction industry, mainly because steel structures are strong, sustainable, and can be built quickly at a low price.

Steel’s flexibility and versatility also means that designers, developers and architects can use it in any number of ways to turn their visions into a reality. This has been the case for centuries, though the ways in which we use steel have changed, and in the future, the construction industry will certainly be disrupted, or evolve at the very least.

Here, I’ll detail the past and present of steel’s use in construction, and outline what the industry’s future could mean for our product.

If you have ever been in construction or have decided to build your own home, you may have noticed just how many steel products go into a residential building. Steel is used in the foundation, HVAC, electrical panels, appliances, decking, and hardware/brackets, just to name a few. There are so many different uses for steel in a residential home alone. So, you can imagine how many other types of steel products go into a commercial application.

That is why steel has reigned supreme in construction for over a century. It’s used today for every building application imaginable, and has become even more versatile in usage. It can be combined with other construction materials, like glass, and cold-rolled and galvanized flat products that have high-elastic limits, toughness, and weldability.

Things have changed in the industry over time. For one, steel is no longer a labor-intensive industry, which initially resulted in cuts in the workforce. International markets are also more competitive, with a majority of steel being produced in China, Japan, and India.

The Great Chicago Fire of 1871 devastated the city, whose buildings were  predominantly made from timber. In the aftermath the city was quickly rebuilt; with lessons having been learned, the fire regulations were made far stricter, requiring non-combustible building materials, which was first met by cast iron columns and wrought iron beams for internal structural support, and outer load-bearing walls of brickwork. As Chicago grew it was hemmed in by the lake and the river, therefore the only way for it to grow, was up. Thus the first Skyscraper, the Home Insurance Building, was built in 1885 and was 10 storeys high. Designed by William Le Baron Jenny; the building was supported by a steel skeletal frame and had external curtain walls, which allowed for much greater height and stability without the weight incurred by masonry construction. This building was the precursor to further skyscrapers in Chicago and then New York. The trend was set for American architecture to be exported around the world and steel framed buildings become commonplace in all the major cities, during the first decade of the 20th Century.

Structural Steel became the building material by which other materials were to be judged and it was not long before another material was found that would become steel’s major competitor during the 20th Century; that material was Reinforced Concrete.