Cambering is often required in structural steel beams to compensate for dead load deflections. In this process, permanent deformations are induced in the girder after it is fabricated in order to match a required vertical profile under service loads. Traditionally, cambering is achieved by application of heat (heat cambering) or force (cold cambering). As in heat curving, heat cambering is time-consuming and costly. Cold cambering is faster and is most commonly used by fabricators. However, in the absence of data relating loads to deformations, the process is based on trial and error and relies on the fabricator’s skills and expertise. Recently, closed form equations and fabrication aids were derived for cold curving based on an available proprietary cold bending system. This paper extends this analysis to cambering where a girder is bent about its strong axis compared to weak axis bending in curving. New equations are derived and guidelines proposed that set limits on the maximum load and permanent residual strains to ensure they are within acceptable norms and prevent local failure. A comprehensive numerical example is included to illustrate this procedure.

The Basics of Cambering

When discussing structural steel Melbourne, camber and sweep refer to different ways of bending or curving sections of steel. A camber is a curve in the vertical plane, where a sweep is a curve in the horizontal plane. It’s inevitable that all structural steel has some camber and sweep, though these elements are often accidental. However, just as often you will need steel with a certain bend, which can be induced in a variety of ways depending on the material, end goal, and tools at hand. It’s also important to understand that cambering need not apply a universal curve to a piece of structural steel—in many cases, a consistent curvature simply isn’t necessary to the end product.

Sometimes the best tool for the job is the aptly named ‘cambering machine’, which simply holds a piece of steel in two places then uses hydraulics to apply pressure to a point in the middle. Other times, a shop might use heat to produce camber, but this can be quite a touchy approach and depends greatly upon the worker’s familiarity with the materials and process. A shop might also use a so-called angle roll, also known as a structural bender, profile bender, or three-roll section bender. 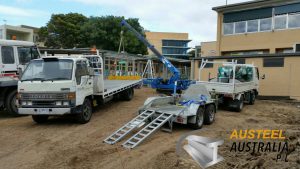 How is Cambering Used?

The obvious purpose of cambering is to take straight steel beams and convert them to vertical arcs. Compared to cambering straight structural steel in the shop, producing and transporting structural steel with the necessary curvature simply isn’t in the same realm of efficiency. Barring scenarios where cambering isn’t viable for reasons of material tolerance and other considerations, it’s by far the easiest and most common way to obtain curved structural steel.

Of course, cambering isn’t only used where a curve in the structure might be necessary. It also plays a key role in negating the impact of heavy loads upon a particular piece of structural steel. A cambered beam, used wisely, can tolerate greater weights more effectively, especially over protracted use or time frames. As with so many aspects of metal fabrication and the manipulation of structural steel, the true efficiency of a particular material only arises in the hands of someone with the proper experience.

The final common role of cambering lies on the opposite end of the spectrum. Sometimes, you simply use cambering to improve the aesthetics of the project. A camber can alter the appearance of a particular structure greatly, without necessarily compromising its function or driving costs up. An engineer with an artistic eye can use cambering to produce very impressive results without any of the sacrifices one might typically associate with aesthetic considerations.

They are produced in steel plants from steel billets by passing them through a series of rollers. They are classified by Bureau of Indian Standards as follows:

Cold formed light-gauge sections are used where thicker hot –rolled sections become uneconomical especially in small buildings subjected to lighter loads. These are produced by cold rolling whereas a smaller number of special shapes are produced onpress brakes. They are available in the form of equal angles, unequal angles, hat sections and 2 sections. They are designated by numbers denoting depth*width*thickness (all in mm).